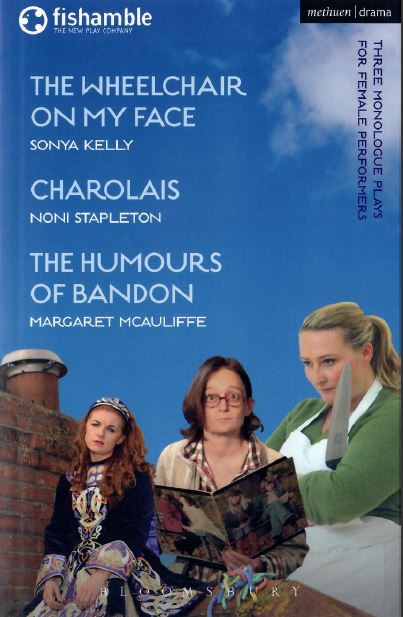 Includes The Wheelchair On My Face by Sonya Kelly, Charolais by Nono Stapleton, and The Humours of Bandon​ by Margaret McAuliffe.

THE WHEELCHAIR ON MY FACE

‘I got my first pair of glasses when I was seven. A nurse came to the school and tested everyone’s eyes. And so it was discovered why I’d thrown bread to the floating crisp packets in our local pond and walked into lamp posts and said, ’excuse me’. Until that day the world was a swirl of moving coloured blobs. I thought it was the same for everyone. How wrong I was.’

​A surreal, black comedy of love, longing and one woman’s intense rivalry with a Charolais heifer. Set on a farm in rural Ireland, Siobhan is forced to share the affections of her farmer boyfriend with the other women in his life – a sneering mother-in-law figure, and a sexy French cow. This is a muddy place of simmering desire, mixing the challenges of farming life and the joy of sex.

THE HUMOURS OF BANDON

On the eve of the Irish Open championship, we meet Annie, a 16 year old Dubliner, as she charts us through the various successes and disappointments of her Irish Dancing life. We share her mind numbing commitment and burning desire to win the Irish Open title. Will she win and, if so, in what way?

‘…witty and warm… McAuliffe, like this rather perfectly formed show, is a winner…’

Click for the production pages for The Wheelchair On My Face, Charolais, and The Humours of Bandon.